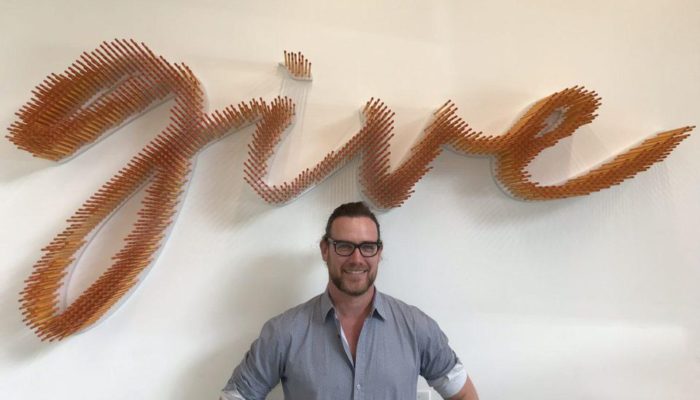 Note: Today we start a monthly series of visits with people who have fascinating jobs in the social impact sector.

Our inaugural get-to-know-you session with Justin Wolff took place in the airy El Segundo, California offices of Yoobi, a school-supplies company that uses a “buy one, give one” (BOGO) model to serve teachers and students in schools in need across America.

Meeting us in a reception area full of neon-colored Yoobi notebooks, pencils, backpacks and more, Wolff, the company’s chief giving officer, virtually bursts with pride as he describes what the company has accomplished in its four-year existence.

“We’ve had double-digit year-on-year growth,” he says, “In this fiscal year we reached 1 million kids, and we expect to reach 1.2 million in the year to come.”

Quite an accomplishment for a company that began in the brains of two friends who knew something had to be done to help American schools but weren’t sure what it was. Wolff, along with founder/CEO Ido Leffler, noticed that the schools-supply space hadn’t been shaken up in recent years, and Leffler, a serial entrepreneur, recognized that he could create a company that sells must-have school supplies while using the profits to provide needy students with basic items they often can’t afford.

Wolff’s passion for this issue is palpable as he shows us around the offices that Yoobi shares with the Beach House Group, a company that has created such brands as Cheeky, which sells mealtime products that contributes one meal to a person in need for each item sold. The offices have a cool concrete and glass aesthetic with splashes of color linked to the colorful products commercialized there.

The BOGO giving program at the heart of Yoobi sounds simple, but the founders quickly learned that good giving is complicated, Wolff explained. After much trial and error and consultation with companies that use a BOGO model (like TOMS), the partners came up with the Yoobi approach.

For each item sold in Target (their exclusive retail partner) or online, Yoobi donates one school supply item to a Yoobi Classroom Pack which is sent to a teacher in a qualifying classroom. Each complete pack contains 30 sets of pencils, crayons, erasers, rulers, folders, markers, glue sticks and pencil cases as well as five sets of scissors to be shared. The packs are distributed for Yoobi by its giving partner, The Kids In Need Foundation.

“It came down to one for you, one for me. That’s how we would divvy stuff up when we were kids,” says Wolff, explaining that valuing a file folder and a notebook equally was the simplest metric they could come up with. “I always say, ‘If you can’t explain it to a six-year-old, then it’s too complicated.’”

Partnerships with Target and The Kids in Need Foundation have been key to making the program work economically, explains Wolff. Target makes commercial Yoobi products available across the United States while The Kids In Need Foundation distributes the packs to US elementary schools where 70% or more of students qualify for free- or reduced-cost school lunches.

Before launching the company, Wolff spent about six months in classrooms in Inglewood, California, talking to teachers, listening to their concerns, and trying to learn how to help. Lessening the burden on already-strapped teachers – who often dig into their own pockets to buy their students supplies – made a lot of sense (on average, American teachers spend about $600 of their own money on school supplies, according to Wolff). And so the Yoobi line of products was born.

The bright pink, blue, green, and yellow supplies are festooned with stripes, polka dots, or bold graphic designs, all intended to brighten up what had been rather drab school supplies aisles. Among a number of merchandising innovations, Yoobi execs convinced Target – where the line premiered in all 1,800+ stores – that the products should be displayed by color, creating a visual explosion of hues and excitement. This focus on creating school supply products that sell well is critical to the success of the Yoobi business model, explained Wolff.

The formula appears to be working. Unit sales have grown every year, and so has the social impact. In the middle of the second-floor marketing office, he grabs a handful of thank you notes from students to demonstrate. “My favorite thing was the Rular (sic),” Zachary writes in perfect penmanship with a very sharp pencil, “because it can measure all of the supplies.”

Reading this, Wolff, a man whose build is powerful enough that his background as a former paratrooper in the Israeli Defense Force is not surprising, gets a little teary.

“It’s still hard to believe that a new company can come from nowhere and in three years be the biggest donor of core school supplies in the country to The Kids In Need Foundation,” he says in a voice cracking with passion.

And Yoobi is not resting on its laurels, Wolff hinted at new innovations to come that will grow the business and its social impact. He’s thankful to be working at a time when the “meteoric rise of social enterprise” has made it possible to have a career in which you do well and go good at the same time.

David Hessekiel is Founder and President of Engage for Good (formerly Cause Marketing Forum) and Peer to Peer Professional Forum and author of Good Works!