Plato said, ‘Necessity is the mother of invention’ and we’re certainly witnessing the birth of a wide variety of new experiments that combine company with cause to entertain and engage consumers.

Since our collective window to the world is a computer screen, a bold new breed of charity-tainment is flourishing as companies compete for valuable online eyeballs using livestreamed events and content. 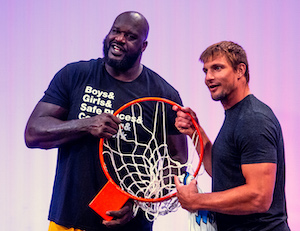 On a massive scale: NBA legend Shaquille O’Neal and Super Bowl champ Rob Gronkowski teamed up in late June for a livestream event in which the celebs competed head to head in lighthearted challenges to unlock donations for their charity of choice (BGCA for Shaq and the NAACP for Gronk). Attracting over 9 million viewers across multiple platforms, the title sponsor of this “party for a purpose”, the General Insurance, donated $50,000 to each of the represented charities. DoorDash also donated 1.25 million meals through their partner Feeding America.

On a somewhat smaller scale with the common denominator of Gronk, the Arthritis Foundation teamed up with CBDMEDIC to co-host a three-hour Facebook Live fundraising event in April: Survive & Thrive: Live Celebrity Challenge to benefit the Arthritis Foundation’s severely at-risk, elderly and immuno-compromised populations, disproportionately impacted by the COVID-19 crisis. Participant donations unlocked gifts from CBDMEDIC. Celebs competed in fun and awareness-building challenges such as attempting to button a dress shirt while wearing socks on their hands (to help viewers understand challenges arthritis sufferers face) and generated over 1.2 million views and raising nearly $300,000 for the charity. Read take-aways from the Arthritis Foundation here.

Zooming in even further, Stella Artois launched Stella Sessions@Home on the brand’s Instagram Live page where local chefs, culinary stars and celebrity foodies help home cooks prepare restaurant-level dishes and experiences while staying home. As a featured part of the series, the brand is donating to the James Beard Foundation to support the restaurant industry and directing consumers to HelpMainStreet.com where people can purchase gift cards and provide much-needed cash to favorite neighborhood restaurants.

How are you using streaming content for good? Hit “reply” and let me know!