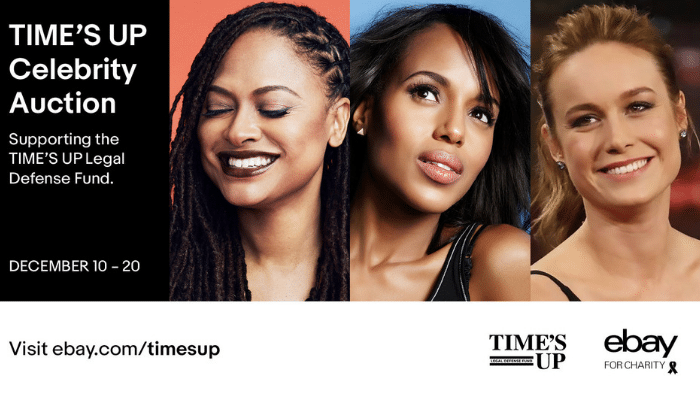 SAN JOSE, Calif., Dec. 10, 2018 /PRNewswire/ — Today, eBay and TIME’S UP are launching an initiative to raise funds for the TIME’S UP Legal Defense Fund in celebration of the movement’s upcoming one-year anniversary. Now through December 20th, shoppers can visit eBay.com/TIMESUP  to make an impact through a variety of inventory and once-in-a-lifetime experiences. All funds raised on eBay for Charity, will benefit the TIME’S UP Legal Defense Fund, which connects those who experience sexual misconduct including assault, harassment, abuse and related retaliation in the workplace or in trying to advance their careers with legal and public relations assistance.

ogether with a star-studded list of celebrities including Ava DuVernay, Reese Witherspoon, Margot Robbie, Brie Larson, Geena Davis, Laura Dernand more, the campaign offers over 35 exclusive once-in-a-lifetime experiences and unique celebrity memorabilia that will give fans a chance to get up-close and personal with their favorite stars while making a difference.

Some of the VIP experiences include an unforgettable trip to Ava DuVernay’s creative campus ARRAY with a chance to join her during a post-production session of her new Netflix mini-series Central Park 5, a selfie on the red carpet with Reese Witherspoon at the Big Little Lies Season 2 premiere, a coffee date with Geena Davis, a meet-and-greet with Kerry Washington with the cast of the upcoming Broadway show American Son, and more.

“We are excited to partner with eBay to offer one-of-a-kind experiences and products from our supporters across the entertainment industry and around the world to the public,” said Fatima Goss Graves, co-founder of the TIME’S UP Legal Defense Fund and President and CEO of the National Women’s Law Center. “Each contribution will especially help low-wage workers connect to the legal resources they need to fight against sexual harassment. This scourge continues to thrive across all industries—and it’s time to tackle it. We are dedicated to creating a reality where no worker must endure abuse for a paycheck.”

“Equality, safety, diversity, inclusion and purpose are integral to eBay’s culture and business,” said Brenda Halkias, General Manager, eBay for Charity. “As one of the world’s leading marketplaces, we recognize the significant work of TIME’S UP and the TIME’S UP Legal Defense Fund, and are leveraging the power of our platform and community to support and celebrate the one-year anniversary of this important initiative.”

Visit  eBay.com/charity  to see all the ways you can give back every day.

About eBay for Charity:eBay for Charity enables members of the eBay community to connect with and support their favorite charities when they buy or sell in the U.S. and abroad. Sellers can donate up to 100 percent of the proceeds to a charity of their choice, while buyers can add a donation to their purchase during checkout. To date, over $810 million dollars has been raised for charity by the eBay community. Visit eBay’s For Sellers, For Nonprofits and My Causes pages to learn more about how you can work with eBay to support a good cause.

About the TIME’S UP Legal Defense Fund The TIME’S UP Legal Defense Fund, which is housed at and administered by the National Women’s Law Center Fund, connects those who experience sexual misconduct including assault, harassment, abuse and related retaliation in the workplace or in trying to advance their careers with legal and public relations assistance. The Fund will help defray legal and public relations costs in select cases based on criteria and availability of funds.  Donations to the TIME’S UP Legal Defense Fund are tax deductible through the Direct Impact Fund, a 501(c)(3) nonprofit organization or through the National Women’s Law Center, a 501(c)(3) nonprofit organization. The initiative was spearheaded by actors and others in the entertainment industry, attorneys Tina Tchen and Roberta Kaplan, and top public relations professionals. Women in Hollywood came together around their own experiences of harassment and assault, and they were moved by the outpouring of support and solidarity against sexual harassment from women across sectors. This inspired them to help create a Fund to help survivors of sexual harassment and retaliation in all industries—especially low-wage workers. They worked together in an historic first to design a structure that would be both inclusive and effective.