Companies Are Stepping Up This Election Season: Here Are The Most Interesting Brand Activations 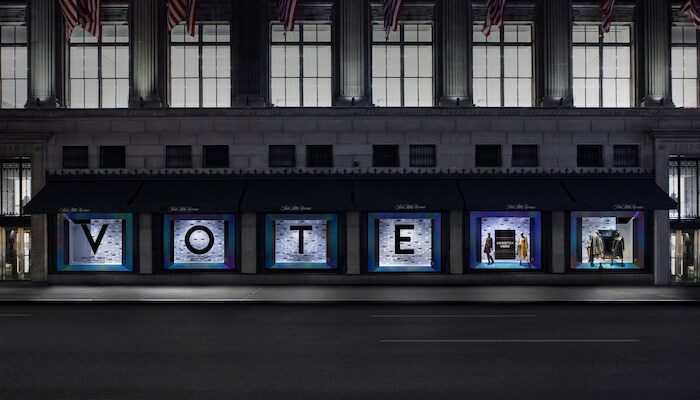 Stakes are higher than ever this year leading up to the national elections in November. Low voter turnout, particularly among young voters, coupled with a predicted shortage of election poll workers due to the Covid-19 crisis have spurred companies to action to ensure that their employees and customers are well-informed and registered to vote during this critical time. 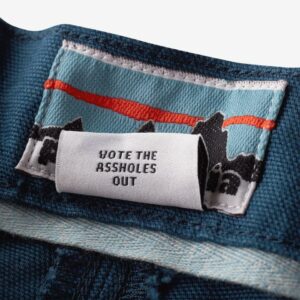 Although Patagonia has most recently garnered attention from provocative tags on its Road to Regenerative Stand Up Shorts that read, “Vote the A-Holes Out”, the company isn’t new to political activism and doesn’t hesitate to leverage its brand to call for change around environmental issues.

As it did in 2016 and 2018, Patagonia will once again close its doors on Election Day this November. For the first time, the company will also offer employees up to four days off to train and serve as poll workers to help mitigate the nationwide shortage. While on the clock, Patagonia employees will also have an opportunity to help get out the vote by writing handwritten letters or texting low-propensity voters.

At its Dallas and Austin stores (locations where a copy of a voter’s ID is required with a mail-in ballot), Patagonia has even provided customers with access to a photocopier.

The clothing manufacturer has also worked to grow Time to Vote, a nonpartisan coalition of companies formed in 2018 to encourage companies to ensure employees had a schedule that would enable them to participate in the election which now boasts over 1,000+ member companies.

Another foundational parter of Time to Vote is long-time voting advocate Levi Strauss & Co. The company is giving corporate and retail employees up to eight hours of paid time off to volunteer at polling locations and has also contributed more than $2.6 million to organizations across the U.S. who are working to remove barriers and improve access to the polls, mobilize voters in marginalized communities, and engage young voters in the democratic process.

Additionally, the Levi’s brand has teamed up with Rock the Vote to provide voting-centric content to users, leveraging its Instagram platform to feature celebrities, activists and nonprofit leaders. The company also created a powerful PSA to motivate youth to vote.

Following the lead of Patagonia and Levi’s to provide employees with paid leave to serve as poll workers are Old Navy, Target and Warby Parker.

Targeting younger voters in partnership with When We All Vote, dating site OKCupid released a new Voter 2020 badge for users to include on their profiles. The company also publicized new research on voting preferences of its users, including the statistic that registered voters are 85% more likely to get a match on the site.

The sexual tension between you and your voter registration form. #VoterRegistrationDay Be a #VILF https://t.co/hg5TWHXZtf

Playing off its upvote/downvote system, Reddit shared that, although its content received an average of 165 million votes each day, the 2016 Presidential election only saw 140.1 million votes. The company launched an initiative called “Up the Vote” featuring an “Ask Me Anything” series on voting rights, laws and processes, special activations on National Voter Registration Day and Vote Early Day including a silly video promoting a banana for President.

If you can vote on Reddit, you should vote on a ballot.

And because it’s estimated that more than 15 million eligible voters didn’t go to the polls during the last Presidential election because they lacked a way to get there, Lyft is expanding its “Ride to Vote” program launched in 2018 to offer even more free and discounted rides to the polls. On Election Day, the ride share company is offering 50% off one ride up to $10 to any polling location or dropbox using the code 2020VOTE. This offer also includes Lyft’s network of bikes and scooters in select cities for the first time.

This election day we're offering 50% off a ride up to $10 to any polling location or mail-in dropbox in the country using the code 2020VOTE. And for the first time ever, this offer applies to our network of bikes & scooters! https://t.co/rPZlcKRtY7 pic.twitter.com/Ueq3rdRFPP

Through the company’s LyftUp program, Lyft is partnering with several nonprofit organizations to distribute free and discounted rides to those in communities where access to reliable, affordable transportation is limited. 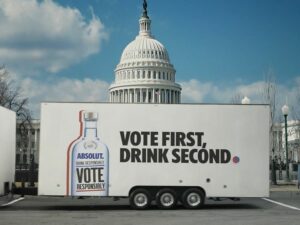 Pernod Ricard’s Absolut Vodka brand launched a non-partisan, integrated campaign that delivers an unexpected message – “Vote First, Drink Second.” Absolut’s first TV commercial in three years debuted before the first presidential debate, encouraging Americans to vote first and save the Absolut for after they cast their ballots.  The company will also close its offices and adjust schedules for manufacturing facilities on Election Day.

Five hundred thousand Jones Soda limited-edition cream soda bottles were rolled out in September as part of their Vote 2020 series. The bottles feature a series of voting-themed label designs as well as a QR code on the back that enables online voter registration with a driver’s license or state identification card in partnerships with the nonprofit Voter Participation Center (VPC).

Also using their products to get Gen Z to the polls this year is Coca-Cola’s Peace Tea, which has partnered with Vote.org to encourage youth to “Speak Your Peace”. The limited run of commemorative cans in which the signature Peace Tea hand spells out the word “VOTE” in tie-dyed lettering also features a scannable icon that directs people to a landing page where they can check registration status, register to vote, access educational resources and more – tools all powered by Vote.org. 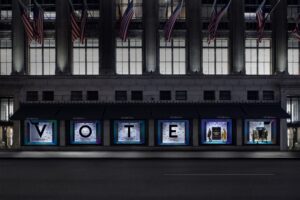 Saks Fifth Avenue is inviting consumers into its New York flagship store through October 9th to register to vote, complete absentee ballot applications and check their registration status. Nonpartisan representatives from HeadCount will be onsite to walk visitors through the registration process and answer any voting-related questions. Technology from Vote.org will power similar services on the Saks website online.

The retailer is also using their Fifth Avenue window display to call upon the community to take action and vote. Saks will also make Election Day a paid holiday for all U.S. corporate associates and work with associates in its stores, as well as distribution and fulfillment centers, to coordinate schedules to enable them to get to the polls.

It’s heartening to see so many companies taking a serious role in encouraging civic participation among their consumers and employees. The brands that rise above the rest are those that find creative and innovative ways to leverage their assets and partner with nonprofits that know how to move people to action.