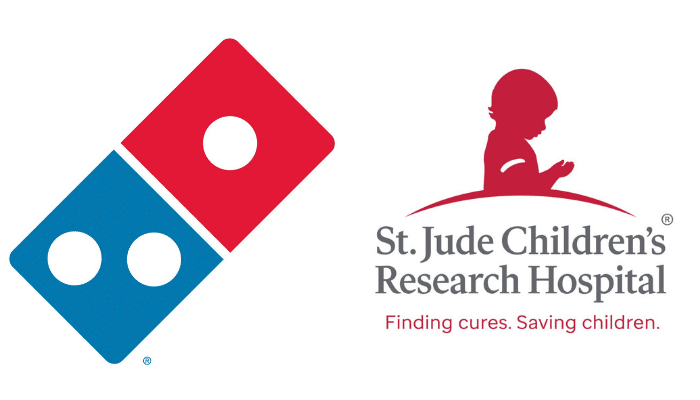 ANN ARBOR, Mich., Feb. 7, 2019 /PRNewswire/ — Domino’s Pizza (NYSE: DPZ) is proud to announce that thanks to customer generosity, the company raised more than $9.8 million for the kids of St. Jude Children’s Research Hospital during the 2018 St. Jude Thanks and Giving campaign. This marks the seventh straight record-setting campaign for Domino’s franchise and corporate stores and brings the total amount raised for St. Jude over the last 15 years to more than $57 million.

“Domino’s truly supports the mission of St. Jude and it’s amazing to see the impact we can have when we all join together in this campaign,” said Richard Allison, Domino’s chief executive officer. “These donations are absolutely lifesaving for the families of St. Jude and I want to thank our customers, franchise owners, and the team members at our franchised and company-owned stores who worked hard to make this record-setting donation possible.”

As a leader in digital ordering, Domino’s makes adding a donation through online ordering simple for customers. The opportunity for customers to also round up their change, online or in the store, resulted in $1.5 million in donations in 2018. In addition, customers could support the hospital by purchasing the St. Jude Meal Deal, which included two medium one-topping Hand Tossed pizzas, a 16-piece order of Parmesan Bread Bites, an eight-piece order of Cinnamon Bread Twists, a two-liter of Coca-Cola® and a $1 donation to St. Jude – all for $19.99. Customers could also donate by clicking on the St. Jude-themed Domino’s Tracker.

Throughout the year Domino’s raised an additional $618,000 for St. Jude through nationwide participation in St. Jude Walk/Run to End Childhood Cancer events across the country and various online digital tests during the summer. Combined with the funds raised during the Thanks and Giving campaign, Domino’s raised over $10.5 million dollars in donations in 2018 for the children of St. Jude. The funds raised in 2018 will apply to Domino’s commitment made in 2015 to raise $35 million over eight years for the Domino’s Event Center at the hospital. Domino’s has now raised more than $33 million towards that commitment.

The St. Jude Thanks and Giving campaign – created in 2004 by Marlo Thomas and her siblings Terre and Tony, children of St. Jude founder Danny Thomas – asks people to “give thanks for the healthy kids in your life and give to those who are not” in order to help St. Jude continue its mission: Finding cures. Saving children.

About Domino’s PizzaFounded in 1960, Domino’s Pizza is the largest pizza company in the world based on global retail sales, with a significant business in both delivery and carryout pizza. It ranks among the world’s top public restaurant brands with a global enterprise of over 15,300 stores in over 85 markets. Domino’s had global retail sales of over $12.2 billion in 2017, with more than $5.9 billion in the U.S. and more than $6.3 billion internationally. In the third quarter of 2018, Domino’s had global retail sales of nearly $3.1 billion, with over $1.5 billion in the U.S. and nearly $1.6 billion internationally. Its system is comprised of independent franchise owners who accounted for over 97% of Domino’s stores as of the third quarter of 2018. Emphasis on technology innovation helped Domino’s achieve more than half of all global retail sales in 2017 from digital channels, primarily online ordering and mobile applications. In the U.S., Domino’s generates over 60% of sales via digital channels and has produced several innovative ordering platforms, including Google Home, Facebook Messenger, Apple Watch, Amazon Echo, Twitter and text message using a pizza emoji. In late 2017, Domino’s began an industry-first test of self-driving vehicle delivery with Ford Motor Company – and in April 2018, launched Domino’s HotSpots, featuring over 200,000 non-traditional delivery locations including parks, beaches, local landmarks and other unique gathering spots.