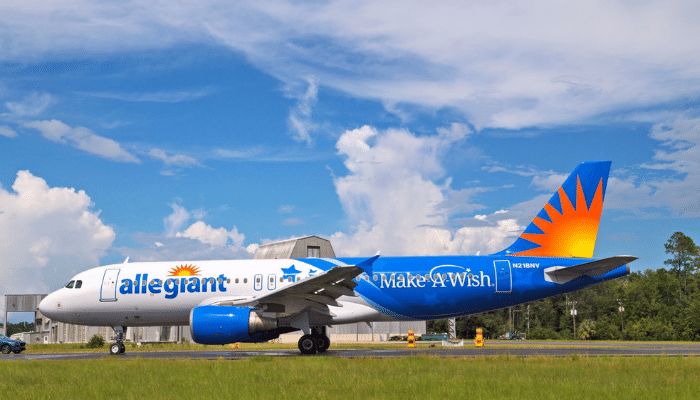 The aircraft, which has served as the world’s largest mobile billboard promoting the six-year partnership between Make-A-Wish and Allegiant, was recently repainted to reflect the nonprofit’s newly-redesigned logo. Allegiant released on social media a new time-lapse video showing the plane’s transformation.

The blue and white Make-A-Wish brand, with a shooting star dotting the “I” in “Wish,” starts in front of the plane’s wings and stretches across half of the fuselage down to the tail, where it meets the orange of Allegiant’s iconic sunburst logo.

The special livery is the only one in Allegiant’s fleet highlighting the airline’s dedication to helping Make-A-Wish grant wishes to children with critical illnesses.

The aircraft is based at Orlando Sanford International Airport in Florida, a fitting location, as more than 95 percent of Make-A-Wish kids flown by Allegiant travel there to visit the city’s theme parks.

Since 2012, Allegiant has partnered with Make-A-Wish, helping to fulfill the wishes of more than 1,400 children. The airline is currently a Wish Champion, recognized for making $1 million in annual contributions.

“All of us at Allegiant are proud to be able to fly kids to destinations where their wishes come true,” said Hilarie Grey, the airline’s director of corporate communications. “Making flying accessible to everyone is embedded in our DNA at Allegiant, and our partnership with Make-A-Wish is an important way we demonstrate that.”

About Allegiant®Las Vegas-based Allegiant (NASDAQ: ALGT) is focused on linking travelers in small cities to world-class leisure destinations. The airline offers industry-low fares on an all-jet fleet while also offering other travel-related products such as hotel rooms and rental cars. All can be purchased only through the company website, Allegiant.com. Beginning with one aircraft and one route in 1999, the company has grown to more than 75 aircraft and 350 routes across the country with base airfares less than half the cost of the average domestic roundtrip ticket. For downloadable press kit, including photos, visit: http://gofly.us/iiFa303wrtF.

About Make-A-Wish®Make-A-Wish creates life-changing wishes for children with critical illnesses. We seek to bring every eligible child’s wish to life because a wish is an integral part of a child’s treatment journey. Research shows children who have wishes granted can build the physical and emotional strength they need to fight their illness. Headquartered in Phoenix, Arizona, Make-A-Wish is the world’s leading children’s wish-granting organization, serving children in every community in the United States and in more than 50 countries worldwide. Together, generous donors, supporters, staff and more than 35,000 volunteers across the U.S., grant a wish every 34 minutes, on average, somewhere in the country. Since 1980, Make-A-Wish has granted more than 300,000 wishes to children in the U.S. and its territories; more than 15,400 in 2017 alone. For more information about Make-A-Wish America, visit wish.org.